One more chicken gone to heaven.

Sadly we've lost another of our ex-battery chickens.

For some reason they all got poultry lice (apparently quite common and transferred by other chickens or wild birds) and the one which passed away was pretty badly infested with it.
We powdered them all on Monday and I even had to pull out some feathers which had the egg clusters on them, but she didn't manage to pull through.

At least I gave her the same length of her life living in freedom and running around as she had in the chicken factory.
Normally when you get chickens from the British Hen Welfare Trust (www.bhwt.org.uk) they are around 1,5 years old, they say because they've stopped laying. Well, the ones we got, kept on laying for another 6 months!
Anyway, we've now had them for 1,5 years and they have stopped laying after producing wrinkly eggs.

Three years is already a good age for an ex-battery chicken and luckily the other three are looking quite healthy.
The one which passed away on Thursday has been buried under the hawthorn tree, so her spirit can live on in the tree!

The average age of ex-battery chickens is around 4 to 5 years old, but I know the Hooligan will live for longest, simply because she is a fighter! (literally!!) 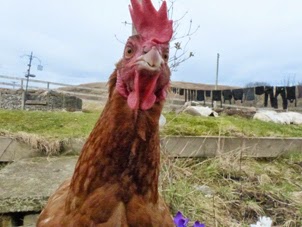