Started snowing the other night. Woke up to a white Christmassy scene.
This is what the chickens (translated from chicken language) thought of it:

The other chickens were quietly listening and muttering to themselves:
"Ooohhh, what is happening? Oooohhh, why is it so cold? Oooohhh, why can't The Hooligan not shut up?"

So, under much pressure from The Hooligan, I opened the hatch

The Hooligan (and the rest) stood still and looked at the white landscape.
"My god that took ages!! What on earth is that??!! It normally is green, isn't it?! Why is it white all of a sudden?! I don't want to go out there! I don't know what that ***** white stuff is!!

The Hooligan couldn't make up his mind as to whether venture out in that strange landscape or to stay in.
"I don't know what to do! It looks kind of the same, but it's white instead of green! Oh,  wait a minute over there is a partially green spot! What if I can jump there and see what happens?"

The Hooligan squatted a wee bit and finally made the jump to the partially green spot.
The rest of the chickens took this as a good sign and went outside with no problems whatsoever.

Luckily after a few minutes lingering next to the shed and absorbing the sight of a white garden, they ventured out. Up to their bellies in the snow, but they enjoyed it,  especially hanging around under the bird feeders hoping for titbits to fall down. 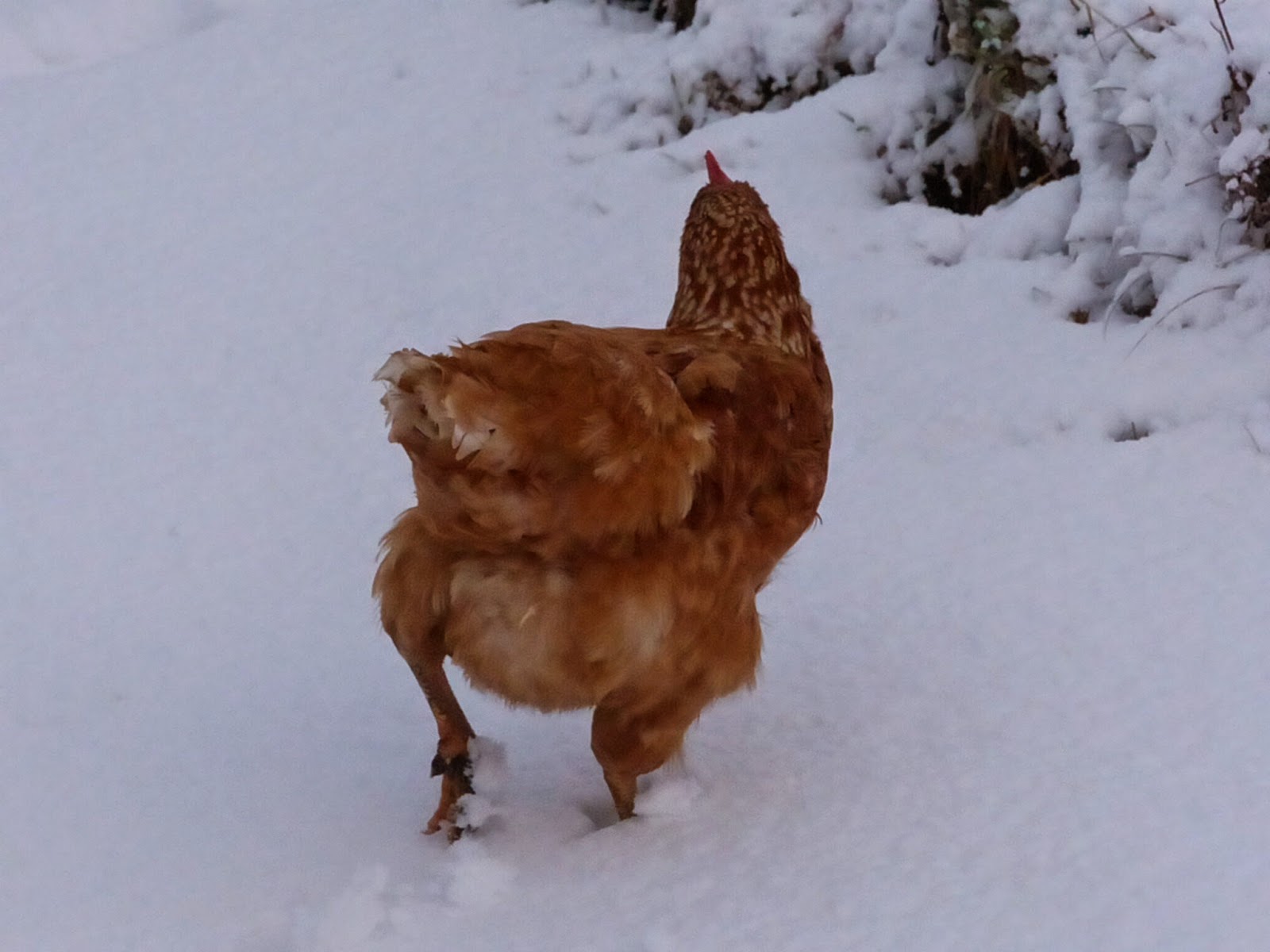 "Ooooohhh, it's alright isn't it? Oooohhh, I'm quite enjoying this.
Oooohhh, is there any more food falling down?"
The Hooligan was also back to her normal self, shouting and swearing at me while running away to the neighbour's garden.
Posted by Unknown at 06:09 No comments:

No time to rest.

Nothing better than creating your own homemade Christmas presents. For the third year I'm assembling hampers for my colleagues (don't tell them though!).

There will be pickled eggs for the ones which love them, there is wine for everyone (don't need to be afraid to miss out myself, since we've made around 10 gallons of the stuff!), probably some pickled vegetables and beer. And if I feel like it, maybe some homemade biscuits or truffles or something else sweet. Feeling peckish myself now...

Soon, I'll be trying out my homemade sauerkraut, I wonder if it worked out just as well as last year. It always smells a bit funny and sometimes there is some mould on top, but that's normal. You can remove the mould, the sauerkraut is still edible. Actually, the mould would be edible too, but it doesn't look too appetizing.

One of my hens is moulting, which means replacing her feathers. This actually puts a lot of strain on the bird, so they won't lay any eggs, until all the feathers have been replaced. I've been giving her extra poultry vitamins to keep her energy levels up. She seems to be doing fine.

Anyway, back to bottling and labelling wine now!
Posted by Unknown at 06:15 No comments:

Winter is nearly here.
Soon we'll be covered in snow or rain or wind and (hopefully) sun.

The garden is resting, so should we really.
Sometimes I wish I could just go to sleep like my hens do; at 4pm they roost and at 8am they wake up again. One of the hens is extremely loud if I don't let her out in time, so we nicknamed her 'The hooligan'. Although she used to be called 'The runaway chicken' because she also has a habit of running away to the neighbour's garden and building a nest there.
We normally don't give the hens names, as they are not meant to be pets. They supply us with eggs and the future chickens, hopefully, with meat too, but because these four were ex-battery chickens, they are allowed to enjoy their retirement. So, they won't end up in the pot!

Although there is not to do in the garden, there is still lots of wine to bottle. I've already bottled about 3 gallons, but there is still 5 gallons left to bottle. I'll better hurry up, because the wines are going to be Christmas presents for my colleagues and friends.
Posted by Unknown at 05:38 No comments: