Filming with The Beechgrove Garden

We have gained another experience!
Watch it on: The Beechgrove Garden, 21st May 7.30pm BBC2 Scotland.

Last Thursday BBC2's Beechgrove Garden came to our place in Glendevon, Central Scotland to show us how to create a bog garden.
We had a fantastic day: the weather was dry, but windy (true Glendevon-style). JP and I even got sunburned! The film crew was very nice and we had lots of fun.

Firstly, George and the film crew went to film the introduction. I have no idea what they have filmed or said, though, they went filming on the path leading up to our house (we stayed at the house).
I guess we'll just have to wait until it's on TV.

Then George, JP and I had to explain what the plan for the day was.
JP and I are creating a five senses garden and the bog area is to separate the vision from the smell borders. So, I was telling George the five senses; smell, taste, touch, vision and hearing. Which, when being filmed for the first time in your life, was tricky. In the end we had to do it again and again, because I kept forgetting the fifth sense (or mentioned 'scent and smell' which of course are the same thing!) And then there was the issue of only one camera, so we had to do everything at least 3 times from different angles. 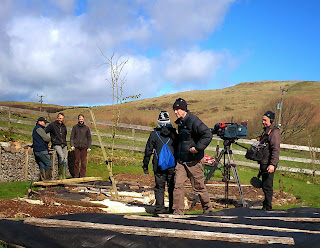 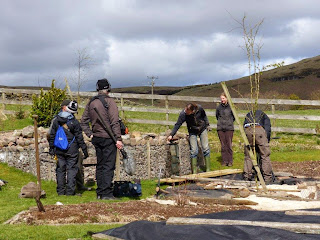 So, that was all the introductions done and we all started digging over the bog area. Our two wwoofers (Nick and Silke) were a great help and were being filmed too.
JP started building a wee bridge in the background.
Because it all had to be done 3 to 4 times, I think I dug the same bit several times. Raking the whole thing was no different.
Camera man: " Could you rake that again?" Me: "Absolutely, not sure what else to do, I've only done it 4 times so far!"
Again planting and moving plants was the same.
First we had to carry the trays with the plants to the bog area, three times.
The camera man would say: "Stop!" And we all froze in mid air. Camera man: "Okay, and walk!" So we walked. 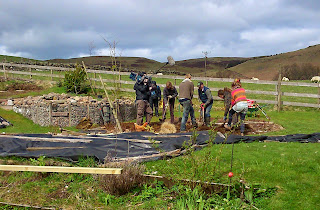 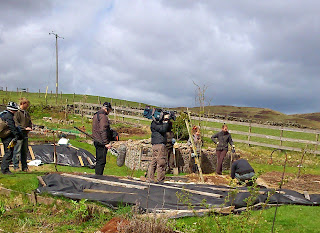 Who knew that for only 5/6 minutes of screen time you need a full day's filming?
George Anderson (presenter), Shiona (director), Bob (sound man), Martin (camera man) and Callum (garden landscaper) and Nick & Silke (wwoofers) came at 9am to help us. And all the excitement was over again by 4.30pm (it seems ages ago now). 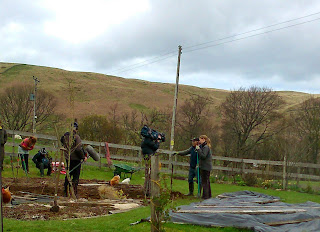 I wasn't that nervous to be honest, I'm more nervous about it being shown on TV than I was for the actual filming. Funny thing was, before they all came, I had a kind of impression in my head of how it would be, but didn't expect to get a microphone and a transmitter in our pocket! I suppose it makes sense, if they want to record what we are saying.... 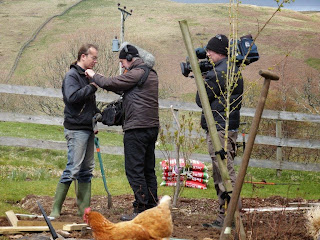 The chickens and especially the Hooligan were great. They noticed us digging and came in force 'to help us finding worms' (which they ate of course). I think the Hooligan thought it was all about her... 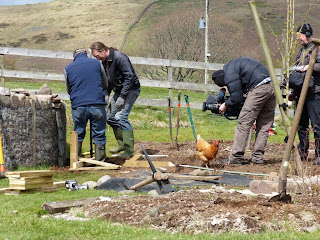 They are on camera too (as you can see above) and you can watch the chickens (and us) on
The Beechgrove Garden, 21st May 7.30pm BBC2 Scotland.
Or if you're south of the border (or Europe) Sunday 24th May 9.00am on BBC2 London (local time).