Conversation with The Hooligan

The other day, the new hens (the Chick-Peas) complained about The Hooligan's behaviour.
This is how it went:

Me:" Hello Chick-Peas, how was your day?"

Chick-Peas:"It was horrible! The Hooligan was blocking the exit to the garden and pecking and swearing at us! We really don't like The Hooligan."

Me:"Hello, Hooli Bully. I got some complaints from the Chick-Peas about you bullying them. What did you do?"

Me: "Calm down alright! Just tell me why you don't like them and what you did.

The Hooligan:"Right that's it, I'm off. I'm sick of listening to you! I'll do and say what and when I like. You can't stop me!!!

And off she runs.

Me:"Sigh, there really is no reason in that chicken. I'll go to the Chick-Peas and tell them what happened."

Me: "Oh dear, The Hooligan is chasing the Chick-Peas. I'll lure her away with some bird food. That will help."

The Hooligan stops in her tracks and runs to the bird food, leaving the Chick-Peas bewildered, but in peace.

All is well again in Glendevon (until next time).
Posted by Unknown at 04:27 No comments:

Stories from the Hen house

The Hooligan is, not surprisingly,  the last one standing.
All the other ex-battery chickens have sadly passed away. They have all been buried under various trees in our garden and it's good to know that they had a nice retirement.

Because chickens can get lonely, we decided to get 5 new ones to keep The Hooligan company.
Well, introducing them to each other gave me enough inspiration to write a whole new blog about!
The Hooligan really lives up to her name. 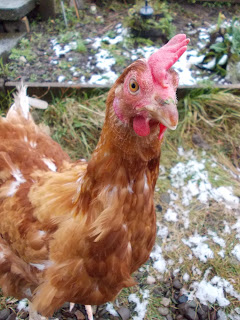 Here is what happened:
The first day we got our 5 Black Rocks, we locked them in the run while The Hooligan was happily playing outside with the neighbour's chickens.
When it started to get dark, we let The Hooligan into the run, so that she could go into the hen house for the night. She didn't really notice there were 5 extra chickens, it seemed. She just commented on how she wasn't able to get into the run.
And went to bed.

Because the new additions didn't know where to go to sleep we lifted them into the hen house where The Hooligan was already snoozing. There was some gentle scuffling going on, but nothing dramatic.

The trouble started when the whole lot woke up the next morning.
I got up at 6am to let them out into the run, so that The Hooligan wouldn't eat them alive while still in the hen house.
When my husband wanted to let The Hooligan out at 7.30am; the 5 new ones were cowering in the corner while The Hooligan was shouting, swearing and generally trashing the place!
She didn't attack the 5 Black Rocks, but she was trying to break through the fence and the language she was using, gosh, I really can't repeat what she was saying. 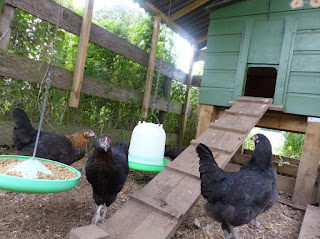 Anyway The Hooligan was free to go and play with her friends from next door, while the new ones stayed in their run. They were quite happy without The Hooligan.
But, my oh my, can they eat! Okay, they are only 16 weeks old, so still have to grow a wee bit, but the amount of food consumed is pretty astonishing.

So night fell and we had to let The Hooligan into the run again...
Poor wee chickens, 4 of them were already on the ramp to settle down for the night, but as soon as they saw The Hooligan they clambered down. The Hooligan was now bullying them and chasing them away from the food. But I had already put two bowls out; even The Hooligan can't be at two places at the same time.
And all the time she felt she also had to verbally abuse the new ones.
Who knows what goes through their little minds.

Anyway, the top hen (aka The Hooligan) has to go in first, so that's what happened and the new ones followed one by one. There was a little bit more scuffling going on this time and I almost interfered, but all seemed well after a few minutes.
Clever aren't they? After just one night of help, they knew where they had to go!
Chickens are known for establishing a pecking order, so we'll try to let nature run its course and only intervene when there is blood drawn (which hasn't happened so far).

Tomorrow the new ones can go out into a small, fenced off area of the garden, so that they can eat grass and clover and can enjoy the sun a little bit.
We'll just have to wait and see what happens when all of them can rummage through the garden and meet the neighbour's chickens at the same time. But that will be in a few more days.