Lots of things have happened in March.
I started sowing again, doing general gardening and Houdini and the Hurkies have been so bad!
Let’s start with the misbehaving hens...
JP and I have been away for two weeks visiting friends and family in the Netherlands. I had been telling my parents (also keen grow-your-own-ers) that we were looking forward to eating spring cauliflower in just a few weeks’ time. Before we left the cauliflowers I had sown had grown into healthy, sturdy plants with small heads forming inside.
But when we got back home.... the vegetable bed had been destroyed! By the chickens.
Completely and utterly wrecked! Trashed! By the chickens!
Strangely enough Houdini and the Hurkies mysteriously vanished after I made this shocking discovery.  The soup we had that night was delicious, though.... 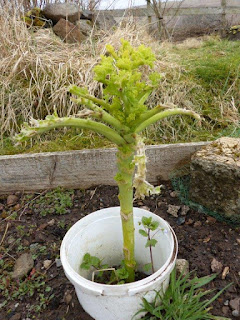 One of the projects we have this year involves replacing more grassy areas (or should I say mossy?) with flower beds. We’ve found it very difficult to grow and maintain a nice lawn in Scotland. The wetter weather and the fact we also have tons of stones in the ground, don’t help either. We’ve already built a massive, elevated pond with all the stones and rocks we’ve dug up and now we’re creating a little pond next to it. With waterways, more bridges the whole shebang! Basically, we are extending the ‘Beechgrove Garden Bog’, to make our garden more adventurous.
We’ll just have to wait and see how many more midges the extra water attracts. 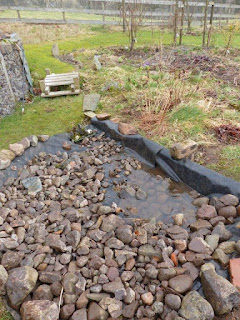