Chickens are fed up with snow (and so are we).

Another day in January. Another weather system brought snow, lots of it.

Couldn't get to work because of a snowdrift 40 inches deep blocking our path to the main road.

Dug a path to fill the birdfeeders. Dug a path for the chickens to walk on (which they didn't!) and dug a path back to the front door to let myself in. 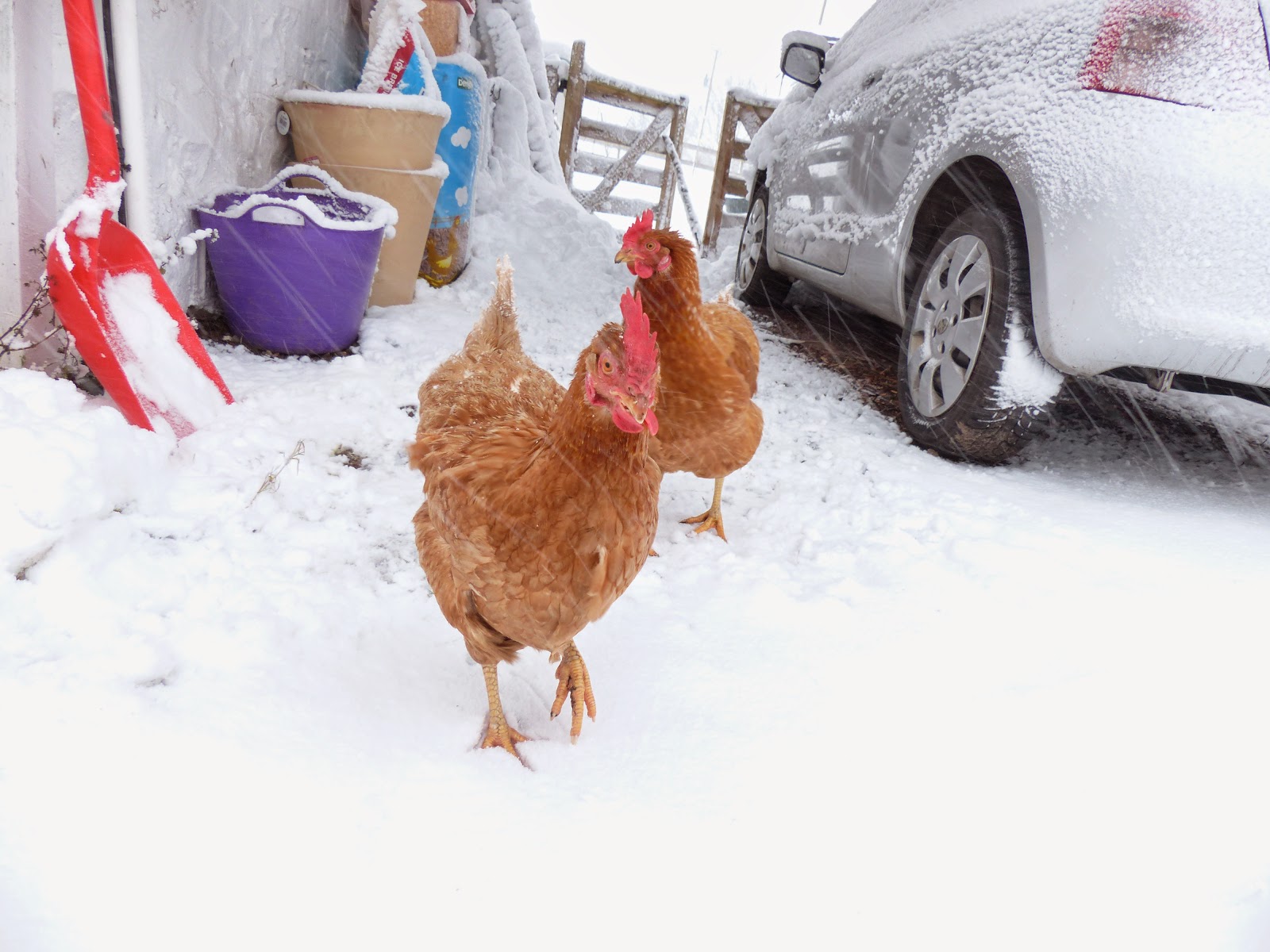 I quite like snow to be honest. After all, we need some snow each winter to notice the change of the seasons, don't we? But living 270m above sea level gives me a bit more of the white stuff than I need to be happy. One year we had lots of snow in Glendevon making driving really difficult and again snowdrifts blocking the path, unbelievably Stirling didn't have any snow whatsoever!
My colleagues keep me up to date with the situation in Stirling and this time they have some snow as well. I keep them updated with pictures of our situation. What else is there to do?!

So chickens, well they didn't have a lot to say about today's weather.
The Hooligan was shouting first, only to pipe down when she saw the real situation. I think they were pretty flabbergasted.
I dug out a path for them to a bit of the lawn where the snow had literally been blown off. Of course they didn't pay attention and just trotted through the deeper bits.
But when the wind was picking up and I noticed two of the hens sitting rather sad in between two heaps of snow, I decided it was time to lock them up in their run.

Did you know you can actually teach chickens to follow you?
When me and my husband were wwoofing (www.wwoof.org.uk) I once had the task to look after the chickens. We were lucky enough to be there when the youngsters were let out for the first time. I think I sat there looking at them for over an hour. It was super fun to watch and some are braver than others. Chickens really do have different personalities! 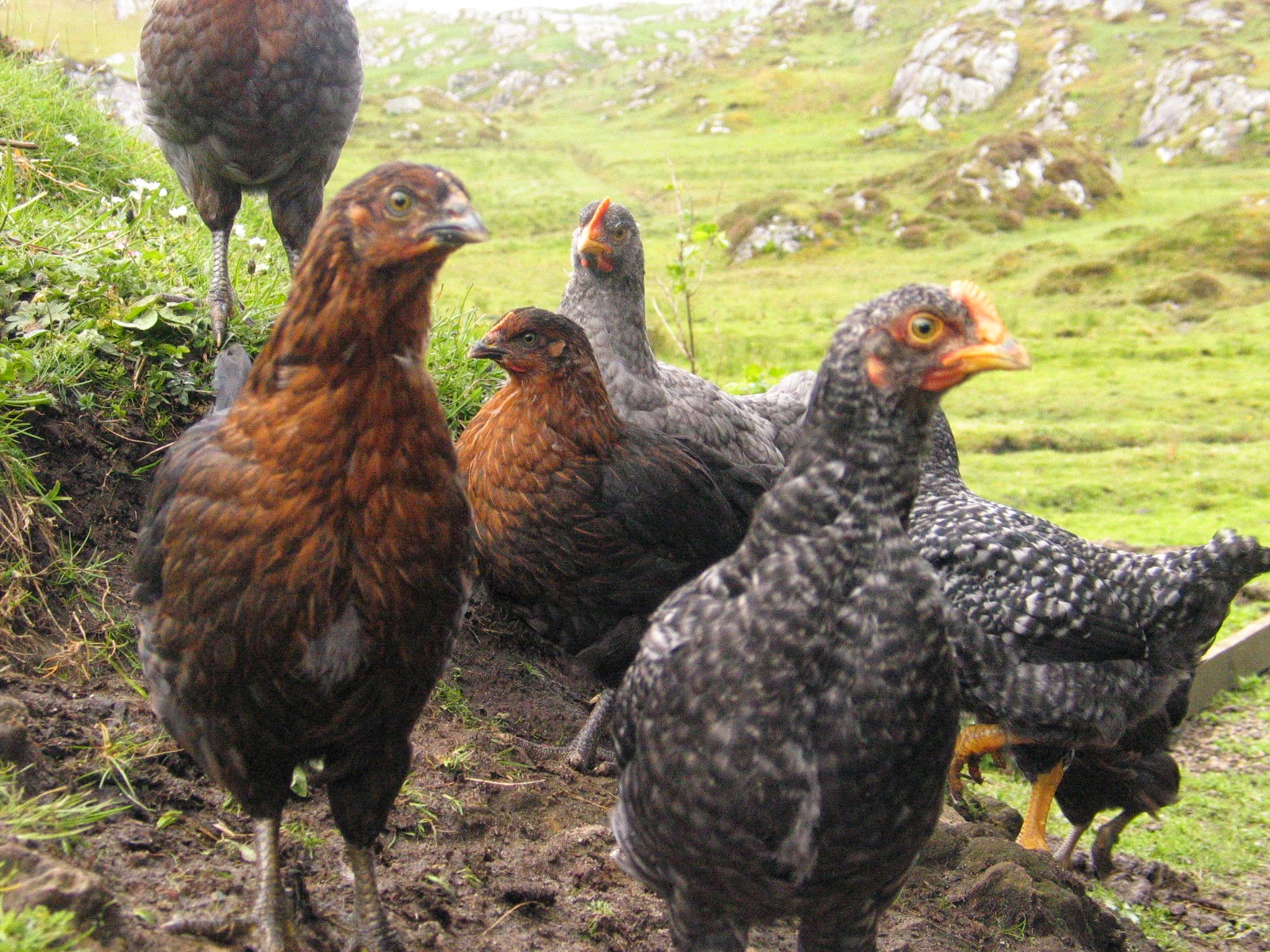 Anyway, every time I fed the young chickens I said:"Chicky, chicky" and without the farmer knowing I had taught them to come whenever I called out. They never forget! When we came back half a year later with my parents I told them how the chickens came when I said "chicky, chicky" and believe it or not, they actually came!
So, when we got our new rescue hens, the first thing we did was to teach them to come on demand. And it works really well, like today when I wanted to coax them into their run.

All four of them are now locked up in their run. Not that they mind, it's out of the wind and out of the snow (sort of) and they have food with extra barley grain and water with extra vitamins.
Don't want them to catch a cold, do we? That's what I'll be getting for looking after the them! 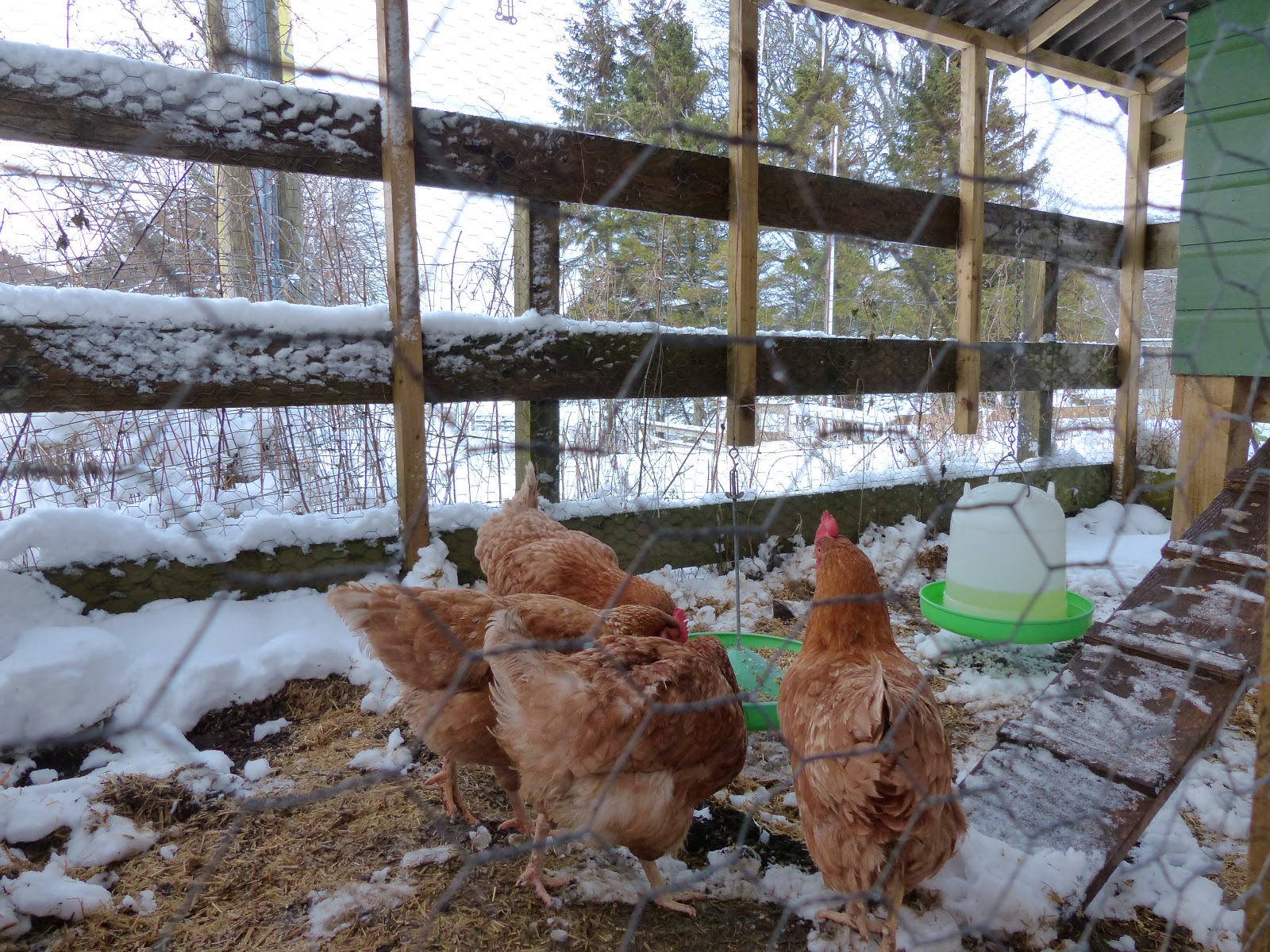